Home    /    Canadian Pacific Approached CSX About Merger Deal
October 13th, 2014
by Udo Freiherr vo...
in
Club News
0 comments
Canadian Pacific Railway Ltd. approached CSX Corp about a combination that would unite two of North America’s largest railroad operators, said people briefed on the matter, as the boom in North American energy reshapes the railroad industry.
CSX rebuffed the overture, made in the past week, the people said, and it isn’t clear whether CP will persist. 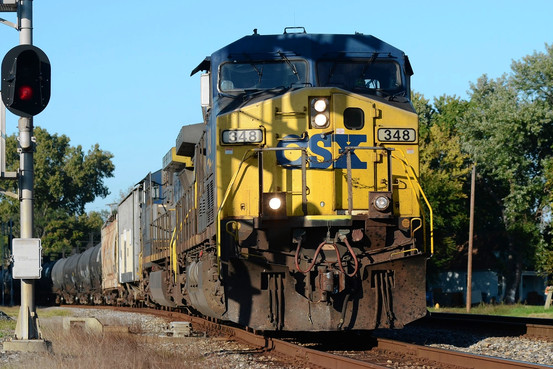 CSX rejected Canadian Pacific Railway’s offer to merge the two operators, a deal that would have created a company with a market value of $62 billion. Above, a CSX train. Associated Press.

But talk of a combination of such giants shows just how far the railroad business has come roaring back, as rails become ever-more-critical to moving North America’s new abundance of oil.

North American railroads have been a major beneficiary of the energy boom, hauling millions of barrels of crude oil. Rail has stepped in where oil fields are developed but pipelines can’t be built, including places like North Dakota, Pennsylvania, New Jersey and Canada’s Atlantic Coast.

A CP-CSX deal would give rise to an industry giant with a combined market value of about $62 billion and, potentially, an increased ability to exploit the North American energy boom.

CSX-controlled rails run from the Midwest to refineries on the U.S. East Coast, but the railroad lacks direct access to North Dakota oil fields. CP does have access to North Dakota oil-loading terminals. A deal would potentially create a single railroad operator that could haul crude from oil fields all the way to fuel-making plants in the Northeast.

A combination of the two would be one of the largest deals in an already active year for mergers and acquisitions, though a rarity in the railroad sector, which has seen few big tie-ups in recent years. It would eclipse in size

Even if CP presses the effort, the potential obstacles could be formidable. The U.S. Surface Transportation Board, which oversees railroads, has a history of intervening in M&A in the industry. In 2000, a proposed combination between Burlington Northern and

Winning regulatory approval for a proposed merger tends to be more difficult when it isn’t welcomed by the target. U.S. national-security officials would also be expected to look closely at any proposed deal between the two, under laws governing foreign ownership of infrastructure such as railroads that is deemed critical.

Either way, the approach is a bold move for CP, which had revenue of 6.1 billion Canadian dollars last year ($5.5 billion), making it the smallest of North America’s top six railroads. It is two years into a turnaround effort that began when Mr. Ackman successfully fought to change its corporate strategy, shake up the board and install a new chief executive.

CP shares have risen sharply under CEO Hunter Harrison, who has cut costs and improved margins.

The company has staked much of its future on transporting oil from Canada’s energy fields in “crude-by-rail” shipments, an alternative to oil pipelines. It has said it expects one-third of its targeted revenue growth over the next four years will be driven by crude-by-rail and plans to invest heavily to expand its operations in Alberta and North Dakota to boost the effort.

CSX’s rail network links to five oil terminals and six refineries along the eastern seaboard, which can be reached from the Chicago interchange within 48 hours, according to the company’s website—crucial assets in efforts to export North American production.

But the new oil trade comes with potential problems. Oil from shale rock is gassier than other crudes and could be more flammable in case of a derailment. Several high-profile oil-train derailments and fires have pushed government regulators on both sides of the border to change rules related to shipping hazardous cargo by rail.

At a recent investor event in New York state, CP’s Mr. Harrison said railroad M&A “makes sense,” as it would help alleviate traffic-congestion issues at the Chicago interchange, an integral gateway that links the U.S. Midwest with East Coast and West Coast ports.

“You got to have somebody to dance with, and I don’t know anybody who wants to dance now,” he added. “My experience in the past, and I’ve had too much of it, it’s more about social and egos than it is true bottom line value to the shareholder.”

CSX is also no stranger to shareholder activism. In 2007, the Children’s Investment Fund and 3G Capital launched a proxy battle to overhaul CSX’s board. The funds successfully elected directors to the company’s board in 2008, but TCI sold off its shares in CSX less than a year later after the railroad’s stock price dropped.

CSX is also familiar with the rough-and-tumble world of M&A. In 1997, its merger agreement with Conrail was complicated when

Norfolk Southern Corp. launched a hostile bid for Conrail, whose shareholders voted down the CSX deal. The monthslong saga ended with CSX and Norfolk Southern divvying up Conrail’s assets.