Gallup: Americans' Take on the U.S. Is Improved, but Still Mixed

Americans' Take on the U.S. Is Improved, but Still Mixed

While large majorities applaud the nation's economy and military strength, they remain critical of the federal government on several dimensions and see room for improvement in numerous areas related to the health and wellbeing of Americans.

WASHINGTON, D.C. -- President Donald Trump's upbeat view of the nation's economy, military strength, economic opportunity and overall quality of life will likely resonate with Americans when he delivers his State of the Union address to Congress next week. Most Americans say they are satisfied with each of these aspects of the country as 2020 begins. The majority also feel positively about the positions of women and gays in society.

At the same time, the majority of Americans are dissatisfied with a host of issues that Trump would do well to address. These include a variety of domestic issues such as public education, healthcare, abortion policies and guns -- as well as the economic issues of poverty and the distribution of income and wealth.

Americans are more evenly split in their assessments of eight other aspects of the country, with fewer than 10 points separating the percentages satisfied and dissatisfied. These include medical care, energy policies, the environment, and government regulation of business, among other issues.

These findings are from Gallup's annual Mood of the Nation survey, conducted Jan. 2-15. Gallup has measured Americans' satisfaction with most of these issues each year since 2001, except from 2009 to 2011, when a more limited number of issues were rated or the question was not asked.

As Trump enters his re-election year, Americans are more positive on eight key issues than they were just before he took office in January 2017.

Over the same period, Americans have grown slightly less satisfied on three issues: abortion (down 7 points), the level of immigration (-6) and the environment (-6).


Long-Term Trend Is Up, but Still Much Room for Improvement

Americans' average satisfaction rating for the 27 issues Gallup has tracked consistently since 2001 is now 47%. This is up three points from a year ago and is the highest since the January 2005 poll.

Today's average satisfaction is roughly on par with the level of the early 2000s. Only in 2002 was the average for this metric substantially higher than it is today. The average 53% recorded that year reflected heightened satisfaction as Americans were in full "rally around the flag" mode shortly after the 9/11 attacks. 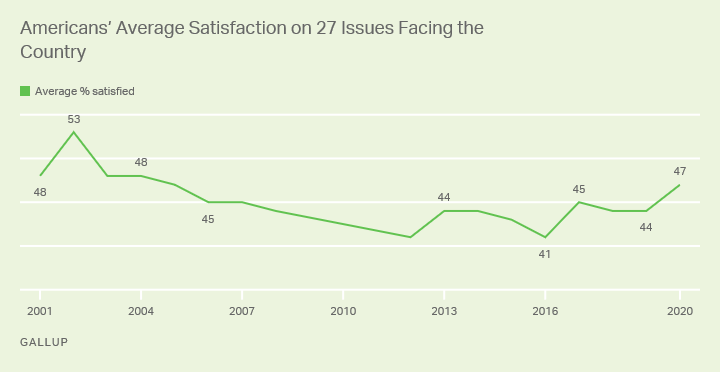 Today's average satisfaction rating reflects significant increases since 2001 in Americans' satisfaction with the nation's military strength (up 20 points) and the acceptance of gays and lesbians (+21), as well as with energy policy (+12), taxes (+11) and healthcare (+8).

One reason average satisfaction isn't higher now than in 2001 is that satisfaction has since declined sharply on matters related to the performance of the federal government: the system of government and how well it works (down 25 points); the role the U.S. plays in world affairs (-18); and the size and power of the federal government (-12). Satisfaction is also down compared with 2001 on abortion policy (-11), the environment (-10), poverty and homelessness (-8), and race relations (-8).

Additionally, Americans' satisfaction has been persistently low on several other issues, including the moral and ethical climate, campaign finance laws, public education, and immigration. (See link to full trends just above the Survey Methods section.)