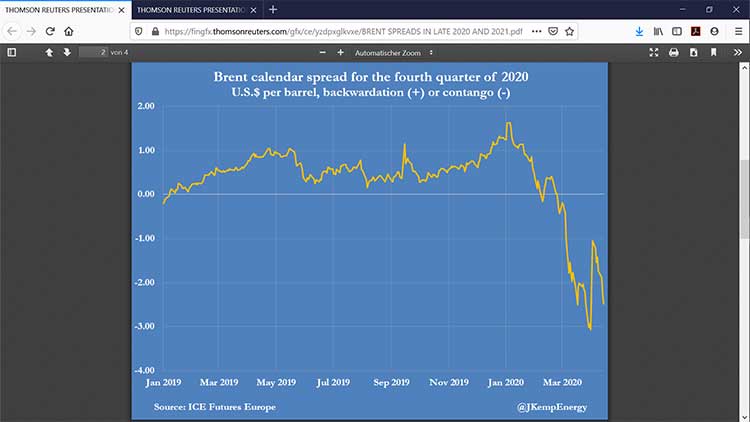 By John Kemp
LONDON, April 15 (Reuters) – Oil traders have become increasingly sceptical about whether the global oil supply deal finalised on Sunday will be enough to prevent a large accumulation of excess petroleum for the rest of this year.

Brent’s calendar spread for the fourth quarter of 2020 has widened to a contango of almost $2.50 a barrel in trading today, up from only $1.05 on April 3, when hopes for the forthcoming agreement were running high.

Calendar spreads, rather than spot prices, generally provide the best insight into the expected balance between production and consumption, though the two are loosely related (https://reut.rs/2RBNEzB).

Brent’s calendar spread collapsed into deep contango in the first quarter as the coronavirus epidemic threatened economies and a volume war erupted between Saudi Arabia and Russia until they were persuaded to rethink as major economies went into lockdown.

The prospect of the deal on record production cuts helped to narrow the contango in early April, but it has flared again as traders have digested the details of the agreement.

The continuing pressure on Brent spreads suggests many oil traders now expect a long and deep recession that will reduce oil consumption significantly and raise inventories for an extended period.

The enlarged OPEC+ group of oil exporters, led by Saudi Arabia and Russia, has agreed to cut production in May and June by 9.7 million barrels per day (bpd) from reference levels.

Russia and Saudi Arabia have agreed to implement their cuts from the same reference level of 11 million bpd (“The 10th (Extraordinary) OPEC and non-OPEC Ministerial Meeting concludes”, OPEC, April 12).

OPEC+ is also assuming there will be additional price-driven output declines worldwide, principally from the United States, as low prices force shale producers to scale back activity.

Production cuts are intended to help to offset the fall in consumption as a result of the pandemic and lockdowns, which the International Energy Agency (IEA) estimates will cut oil use by an average of 9.3 million bpd in 2020.

“The measures announced by OPEC+ and the G20 countries won’t rebalance the market immediately,” the IEA warned on Wednesday though it should provide support over time (“Oil Market Report”, IEA, April 15).

“But by lowering the peak of the supply overhang and flattening the curve of the build-up in stocks, they help a complex system absorb the worst of this crisis,” the IEA concluded.

The long-term production profile agreed by OPEC+ aims to limit, though not eliminate, overproduction in the next few months to limit the build up of excess stocks, then hold production below consumption later in 2020 and through 2021 into early 2022 to draw down the excess stocks accumulated this year.

The OPEC+ deal’s proposed programme is a hugely ambitious attempt to curtail global production to manage an equally unprecedented slump in consumption.

In effect, the it is the first attempt to allocate incremental oil consumption between the world’s three largest producers.

Russia and Saudi Arabia are explicitly involved, with specified reference levels of output, while the United States has been enlisted as an unnamed silent partner.

For much of the past decade the United States has captured all or almost all of the incremental growth in global oil consumption, with the exception of three years of low prices over 2015 to 2017.

The agreement assumes prices will remain low enough throughout the programme to limit any resurgence in U.S. output at the expense of the other two major partners.

The deal’s success depends on a relatively early phased exit from current lockdowns and rapid resumption of near-normal business activity as well as passenger and freight transportation.

The strategy relies on strict lockdowns to bring the epidemic under control quickly, followed by an exit strategy based on ramped up coronavirus testing and targeted isolation, quarantine and containment measures.

It further assumes that lockdowns can be lifted substantially without risking a second wave of infections and deaths later in the year.

More fundamentally, like other policy responses to the pandemic, the OPEC+ strategy relies on the economy being like a lightbulb that can be switched off and on quickly, with no lasting impact.

As part of this effort, unprecedented fiscal and monetary intervention aims to protect economic relationships during the lockdowns so they can later resume as near to normal as possible.

But nothing in the economic history of the 20th and 21st centuries suggests this is remotely plausible. Recessions leave lasting scars on the economy. The deeper and longer the downturn, the longer the after-effects linger.

In reality, many smaller and leveraged businesses are likely to fail because they do not have the financial reserves to ride out an extended stoppage.

Even with massive fiscal and monetary intervention, a large percentage of households and businesses will suffer a significant loss of income and output.

Some of the production and income lost during the recesssion will be permanent, or at least linger for several more years, much as the impact of the 2008/09 financial crisis was evident on incomes and output for years.

If the economy cannot be jump-started quickly, and at close to pre-crisis levels, oil inventories will rise even further, requiring even deeper and longer production cuts.

The persistent weakness of futures prices for oil delivered towards the end of 2020 and 2021 indicates that many traders now see this as the most likely outcome.

– Volume warfare in the oil market: Saudi Arabia, Russia, the United States and the balance of power (Reuters, March 11, 2020)

WSJ: How the Coronavirus Will Reshape World Trade