Whether or not the president wins, he confounded Democrats, especially in congressional races, by improving on his 2016 numbers in rural areas

The 2020 election, though still undecided, has already shown that a conservative, populist movement driven by rural voters wasn’t a fluke of 2016 but a potentially durable bloc. Donald Trump, despite presiding over a rapidly diversifying country, used his base to be competitive in most battleground states and to help Republicans outperform in the race for Congress.

The evidence can be seen in decisive victories for Mr. Trump in Ohio, Iowa, Florida and Texas—all states he retained from his 2016 victory—and unexpectedly strong GOP support in states such as Iowa and Maine, where Republican Senate incumbents fended off Democratic challengers.

Democrats, despite some success, including in Arizona, were unable to win or hold some key seats in GOP-leaning areas around the country, even as small donors across the country handed over tens of millions of dollars in efforts to diminish Republican political power.

The outcome of the presidential election and control of the Senate hung in the balance as of late Wednesday, with millions of votes still to be counted.

Even if Joe Biden prevails against Mr. Trump, the margin of his victory is likely to be narrower than polls suggested and Democratic officials hoped. In some key states, the president was able to turn out white, rural areas in higher numbers than in 2016. Republican strategists say Democrats lost ground with these households not just on policy but also culturally, citing what GOP voters consider culture wars over political speech and social issues.

“It really is reflective of the transformative nature of the Trump presidency,” said Charlie Gerow, a longtime GOP strategist based in Pennsylvania. He described a fundamental shift within the party, toward more support from working-class Americans, particularly whites, and less emphasis on winning over elites, including in suburban areas.

“The suburbs are in many respects a little bit of a bubble,” Mr. Gerow said, pointing to typically higher education rates and household income. “That isn’t most Pennsylvanians. It’s just not.”

The open question is whether this coalition represents a lasting form of conservative populism, or something unique to Mr. Trump that will fade when he leaves office. Democrats said that at a minimum, the results made clear their “blue wave” ambitions were on hold.

“At some point, there will be a tipping point, where the urban areas are too large, but the challenge for Democrats is that our margins in rural areas continue to go down,” said Morgan Jackson, a Democratic strategist in North Carolina who advised Democratic Senate candidate Cal Cunningham in his quest to oust Sen. Thom Tillis (R., N.C.). That race is too close to call, but Mr. Tillis had a slight edge Wednesday afternoon.

Many of Mr. Trump’s supporters have described a deep, personal connection to his unconventional approach to politics, and Mr. Trump has often sought to host rallies in smaller towns. “Trump brought the turnout by going to these places, talking to people, listening to them,” said House Minority Leader Kevin McCarthy (R., Calif.).

Mr. Biden and Mr. Trump represent starkly different Americas, according to the AP VoteCast survey of more than 110,000 voters across 50 states, conducted Oct. 28 through Election Day.

Trump voters in the survey were overwhelmingly white—about 86% nationally—compared with 62% of Biden voters. Only a fourth of Biden supporters come from small towns or rural areas. Nearly half of Trump voters live in those areas. The two political camps also have vastly different experiences with the coronavirus pandemic.

Mr. Biden’s supporters were more likely than Trump voters to have personally experienced a job loss or loss of income due to the pandemic, or to have a close friend and family member die from the coronavirus, according to the survey conducted for AP by NORC at the University of Chicago.

Also resonating with his supporters: Mr. Trump’s giving priority to the economy over more stringent public-health measures to control the virus’s spread.

Overall, 39% of voters in the survey said the federal government should place a higher priority on limiting damage to the economy even if it increases the spread of the virus. Of that group, Mr. Trump won 85%.

Mr. Trump also made inroads with the majority of voters who said the opposite, winning two in 10, according to the survey, showing the limits of Mr. Biden’s campaign trail emphasis on the virus over other issues.

A little more than four in 10 Trump voters said they strongly or somewhat oppose requiring people to wear masks around other people outside their homes, compared with 5% of Biden voters in the survey who said the same. The survey also indicated that Mr. Biden’s rhetoric about systemic racism in American society and particularly in policing fell flat.

Trump voters were less likely than Biden voters to say racism was a serious issue in policing, or to say the criminal justice system needs an overhaul or major changes. When asked how serious a problem racism was in American society, 54% of Trump voters said it was very or somewhat serious, compared with 96% of Biden voters.

Still, 88% of Trump voters cited the protests over police violence as a factor in their voting decision.

House Republican leaders on Wednesday reveled in the effectiveness of their messaging tying Democrats to calls by progressive activists and some lawmakers to defund police departments.

National Republican Committee Chairman Tom Emmer (R., Minn.) said GOP attacks against Democrats over defunding was effective “everywhere that it was used.” He added: “You can’t equivocate. You either support the men and women of law enforcement or you don’t.”

Some Democrats acknowledged the strategy had worked. “I think the defund the police issue hurt a lot of our candidates,” said Rep. Tim Ryan (D., Ohio), who said Democrats in his state lost after facing attacks over the topic.

Mr. Trump appeared to make inroads in Democratic strongholds in Texas along the Rio Grande Valley. Mr. Biden was ahead of Mr. Trump in Cameron County, which is at Texas’s southernmost tip along the border with Mexico, by just 13 percentage points after Hillary Clinton won the same county by more than 33 percentage points.

In Texas, Mr. Biden won Latino voters 63% to 36%, which was on par with the split nationally, according to the AP VoteCast survey.

Jared Hockema, chairman of the Cameron County Democratic Party, said most voters in South Texas are still Democrats and he expects waning support to be an anomaly rather than permanent. But he said the results should be a flashing red light for national Democrats to invest more resources in the region, and not just to focus on recent gains in some big-city suburbs.

How long do you think Donald Trump’s rural coalition will endure? Join the conversation below.

“As we expand the coalition, we need to include the folks that were already there,” he said.

In the Maine Senate race that attracted national attention and donations for more than a year, Democrat Sara Gideon raised $70 million to Sen. Susan Collins’s $24 million, and she had led in every state poll since February. 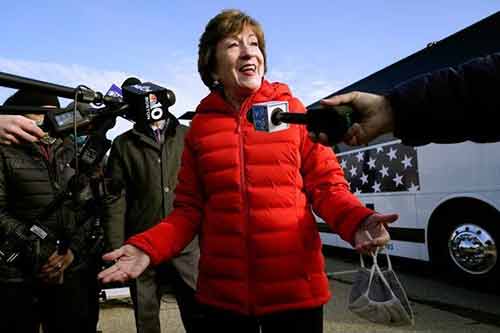 Still, Ms. Collins won her fifth term. Thomas Lizotte held local office in rural Maine as a Republican and was Ms. Collins’s 2014 Piscataquis County re-election co-chairman before souring on the GOP and voting against her this year. He credited Ms. Collins’s surprise win to her closing message. Ms. Collins played up her Maine roots in TV ads and cast Ms. Gideon, who moved to the state in 2004 and served as speaker of the state House of Representatives, as an “outsider.”

“The whole idea of voting for or against a senator based on national issues doesn’t really apply here,” Mr. Lizotte said. “What’s much more pertinent is the personal connection. Susan Collins knows someone in every single town, whereas Sara Gideon is a relatively new face.”

Democrats hoped to regain their footing in Iowa, a state President Obama won twice. Mr. Biden added a last-minute campaign stop in the state in the final week before Election Day. But the Associated Press on Tuesday declared Mr. Trump the winner there, and with 99% of precincts reporting Wednesday afternoon, Mr. Trump had a 8.2 percentage-point lead—slightly smaller than Mr. Trump’s 9.6 point lead over Mrs. Clinton four years ago.

“I view Trump as a once-in-a-lifetime president for a lot of these folks. I mean, I’ve never seen the amount of flags and just passion for a presidential candidate as you see in a lot of the people [who voted] for Trump,” said J.D. Scholten, a Democratic House candidate whose race in a rural Iowa county was called in favor of his Republican opponent Tuesday evening. He described a “Trump tidal wave” in rural areas—places where Democrats had made some progress in the state in the 2018 midterm election.

“There’s something culturally that is working for Republicans and it’s definitely not for Democrats,” he said, noting that his campaign message faulting Mr. Trump’s handling of the coronavirus didn’t resonate with rural voters, despite widespread Covid-19 cases in some counties in the district he sought to represent in Congress.

“As Iowa Democrats, I think we’re going to have a lot to look on and a lot to refresh and go back to the drawing board,” he said. “We got smoked. There’s no sugarcoating it.”

COVID-19-Paradox of increasing capacities versus focus on Hippocratic ethics