By John Kemp
LONDON, Sept 15 (Reuters) – Like other technology shifts, energy transitions provoke strong responses because they involve changes in lives and livelihoods, that go far beyond narrow technical questions about the source and delivery of energy.

And because energy supply is among the largest employers and most basic of all industries, providing input for every other sector of the economy, transitions are among the most disruptive of all technology changes.

Even if a transition is a Pareto improvement from the perspective of society as a whole, where the winners could theoretically compensate the losers, significant compensating transfers rarely happen in practice.

More often, the losers from a change in energy system or other technology are expected to find new employment, changing industry and sometimes location, with limited financial assistance.

But they arouse strong political, emotional and moral passions because behind every technical discussion lies a deeper, often hidden, debate about reallocation of incomes and opportunities.

Transitions are never just about cost, convenience and security; they are always about individual lives and communities too. They are inherently political as well as technical.

Most energy and technology transitions play out slowly, over periods ranging from a couple of decades to half a century. But that is still relatively fast compared with an average working lifetime.

In the advanced economies, the average working lifetime is a little over 40 years for both men and women (“Ageing and employment policies”, Organization for Economic Cooperation and Development, 2020).

Someone who started working in the 1890s without electricity at home, telephone service, water and sewerage, radio and refrigeration would have retired when these things were common, at least in urban areas.

In China, the economic transformation over the 40 years from the early 1980s to the early 2020s has been even more profound in every dimension.

Over the last two centuries, changes in energy systems and other technologies have eliminated tens of millions of jobs, first in agriculture, then mining, and more recently manufacturing.

While the changes have increased productivity and incomes overall, they have inflicted substantial distress on individuals, companies and communities.

In the long run, energy system and technology changes have increased economy-wide productivity and made everyone better off. But the long run can exceed the remainder of any one individual’s lifetime.

In the short and medium term, energy and technology changes have often made large groups of once-comfortable workers worse off (“The technology trap: capital, labor and power in the age of automation”, Frey, 2019).

In theory, workers displaced from an industry where employment is declining, either as a result of falling consumption of the product or an increase in labour-saving automation, can seek employment elsewhere.

In practice, workers are often tied to specific occupations and even more to geographical locations, and show a marked reluctance to change careers or migrate in search of new work.

Occupational mobility is most often to new jobs in closely linked or adjacent industries – which is not much help when employment in a whole complex of related industries goes into decline.

Workers show even less mobility geographically. Social ties to communities make long-distance permanent migration in search of work comparatively rare for workers above the age of 30 or 40.

In Britain, willingness to move to a new region for work peaked in the 25-29 age group and declined thereafter, according to a UK government report published in 1966 (“Regional development”, Fisk and Jones, 1972).

In the United States, which was once characterised by relatively high levels of geographical mobility compared with Europe, inter-state and inter-regional movements have declined over the last 50 years.

Occupational and geographical immobility matters because heavy industries, including energy industries, are often concentrated in a small number of communities, where they provide a large share of total employment.

Decline of an industry and its employment is therefore often synonymous with a deterioration of the local economy and an increase in deprivation.

The individuals most at risk from energy transitions and other shifts in technology are those aged over 35 and especially those over 45 and 55 years old.

Some 15-35 years after they first entered an industry after graduating from school or university, slowly accumulating technical changes are very likely to be remaking the industry and its employment.

But by that stage in their working lifetime, those people will have invested significantly in industry-specific skills and experience that may not readily transfer at the same income to another industry.

And their geographical mobility also declines progressively above the age of 35, compounding the difficulty of switching from an area dominated by declining industries to one characterised by expanding sectors.

Like other technology changes, the risks associated with energy transitions are borne disproportionately by older, more experienced workers at mid-career or a little beyond.

The vulnerability of specific groups of workers, often concentrated in particular communities and regions, is what has always made energy transitions politically sensitive.

But political sensitivity has rarely been enough to stop an energy or technology transition, though it may slow the process by a few years, buying a bit of extra time for a section of the workforce. 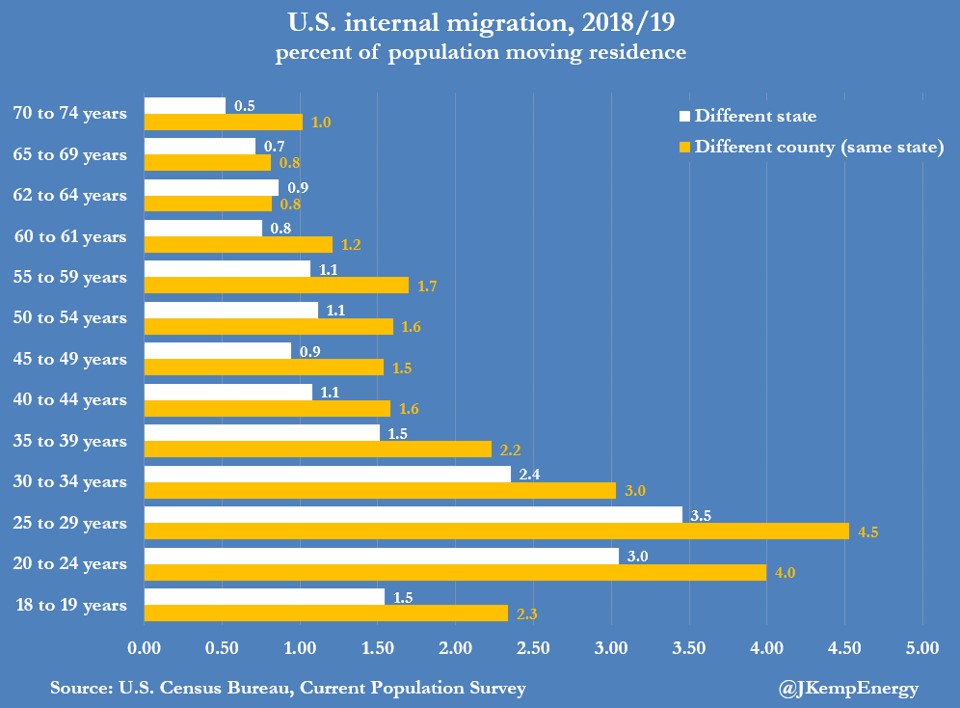 IF YOU know anyone else who might like to receive best in energy and my research notes, they can add their emails to the circulation list using this link: http://eepurl.com/dxTcl1

Back to News section